At Ellis Patents we are committed to quality in everything we do; meaning we don’t just meet industry testing standards for cable cleats, we exceed them.

As part of this commitment all our applicable products are tested to the requirements of IEC 61914:2015 (Cable cleats for electrical installations); with the majority of testing being conducted in our own in-house testing facilities in Rillington, North Yorkshire.

This article provides a brief overview of our in-house testing capability.

Lateral load tensile testing
Lateral tensile testing is used to identify the most onerous mounting conditions for the device under test (DUT). The result is a stated measurement, in Newtons, of the force the DUT can withstand without exceeding the maximum permissible elongation – i.e. the level where it is no longer able to safely perform its function.

Axial load testing uses the lateral tensile tester to measure the force required to displace a mandrel (used to represent a cable during testing) through the DUT. This simulates cable movement due to thermal expansion and contraction, and the holding characteristics of the DUT when mounted in this orientation.

Needle flame testing is used to determine whether a potentially flammable product complies with IEC 61914:2015’s self-extinguishing requirements, and doesn’t drip hot material that can cause items below to ignite.

Impact testing is used to simulate potential damage that can be caused to products during transit and while on site. The DUTs are placed in an extremely low temperature freezer for a cold soak period then impact tested straight from the freezer using impact hammers of varying weight depending on the classification.
Following this DUTs are visually inspected for damage that could impair functionality. 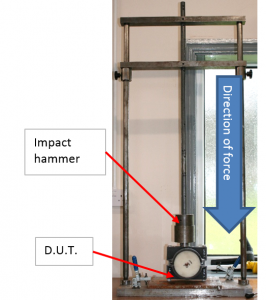 UV testing is used to assess the vulnerability of the DUT to ultraviolet light conditioning over a duration specified in IEC 61924:2015. After the exposure cycle the DUT is removed and subjected to the impact test criteria to determine whether its structural strength has been reduced. Further testing can be conducted involving tensile testing programs, but this is not a requirement of the standard.

All testing at Ellis Patents is conducted following the guidelines outlined in IEC 61914:2015.  The standard does though only require the smallest and largest products from each model range are tested. We test the smallest, middle and largest products in each range as standard, with follow-up testing as required.
Only short circuit and salt corrosion testing are conducted by external test houses.

We also have the capability to conduct testing outside the parameters of IEC 61914:2015. This allows for bespoke product development, customer / project specific product testing, and quality testing to be carried out upon request.